Those commentators who have been critical of the overuse of austerity policies in Ireland are claiming that Ireland’s plunge back into recession is proof of their views.

Since 2008 the Irish economy has been battered by international forces beyond its control in addition to massive self-inflicted damage caused by a property market bubble and the near collapse of the Irish banking system.

The effects were far-reaching. Unemployment stands at 13.7%, public services have been slashed, bitter wrangling continues between the Government and its own employees in the Civil and Public services. Emigration has soared to Famine-era levels while those left behind have been burdened with extra taxes and levels of debt that will take decades to pay off.

Ireland re-entered recession in the final quarter of last year and with ‘negative growth’ prevailing it seems that the austerity and tax increases have dampened any possibility of a domestic recovery. The Property Tax did not help either. Demanded as a condition of loans granted to Ireland by the EU/IMF/ECB the Property Tax was almost gleefully imposed by the Fine Gael Government who clearly see it as an easy way to bring in finance. Political cover was provided by the European ‘troika’ who could be blamed for demanding its imposition – ‘it wasn’t us – its them!’ Job done. 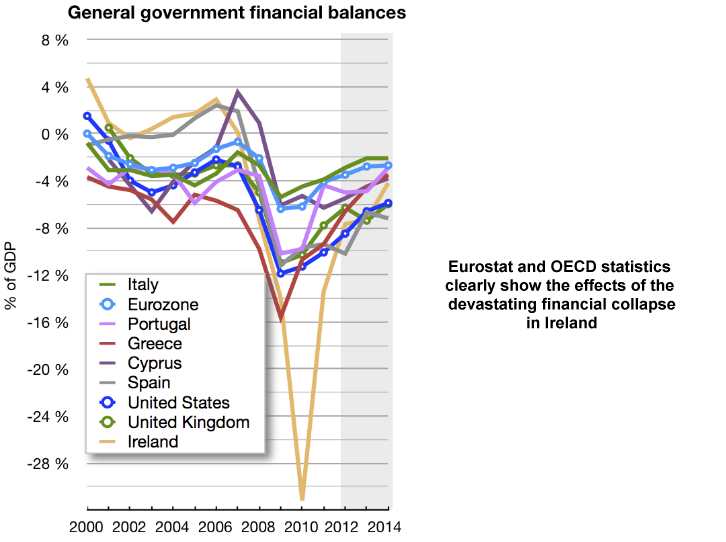 The uncertainty caused by the Property Tax, the fear of its impact and the never-ending burden of yet more taxation certainly played a huge part in dragging the country down again.

Ireland is also more exposed to events outside its borders than most other countries. As an island nation the most basic raw materials must be imported, raising costs. Exports to Britain, Europe and beyond have to be expensively transported, raising costs. Any change in the value of the Sterling and US Dollar currencies can lay waste to the best laid of export plans in the space of a few hours, again raising costs.

Even bad weather can effect the Irish economy, especially domestic spending, further depressing a beaten-down population who retreat to their ‘mortgaged to the hilt’ apartments in semi-derelict half-built housing estates to ponder the future – ‘I wonder if Australia is still looking for electricians?’.

Maybe this is the bottom of the trough?

Domestic spending looks to be improving now that the Property Tax shock is pretty much out of the way. Anecdotal evidence of a recovery in both the construction market and the property market have been borne out by recent numbers. Major road projects are being undertaken for the first time since the economic crash in 2008, a sure sign that things are about to improve. The South County Dublin section of the Dublin property market has actually seen a 12% increase in prices in the first 6 months of 2013 according to Irish property website Daft.ie, with an overall rise of 5.3% in Dublin prices over the last year.

Hot stuff. And even the weather has improved!

So despite the economic woes there does appear to be grounds for optimism. This is year five of the greatest economic crash in the history of the country. Being well positioned to catch a ride on the global economic upturn that will inevitably come must surely be the current Government’s major priority, as well as its best bet for being re-elected.