Walter Osborne was born in 1859. He painted mainly in the French Brittany region of Quimperle but moved to England in 1884. His paintings of rural scenes that dominated his early years gradually gave way to an ‘impressionistic’ interpretation of those subjects that he had great empathy for, namely women, small children and old people. His superb images of young girls at play are still cherished by the National Gallery of Ireland: The Dolls School, The House Builders. 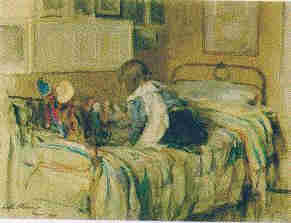 John Lavery was born in Belfast but was educated in Glasgow, London and Paris. He originally worked as an apprentice photographer but harboured ambitions to be a portrait artist. He became an official war artist and eventually a chronicler of his times with paintings such as ‘The Ratification of the Irish Treaty in the English House of Lords, 1921’ and ‘Blessing of the Colors: A Revolutionary Soldier Kneeling to be Blessed’. His most famous work was perhaps that of his wife, Lady Lavery, ‘The Red Rose’ which was a painting that had a number of incarnations before it forever bore the face of the woman who was to adorn the Irish Pound note for half a century. 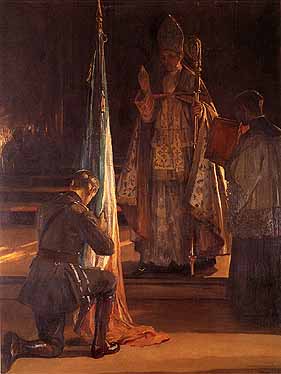 William John Leech was born in Dublin in 1881 and studied under Walter Osborne at the Royal Hibernian Academy Schools. He became increasingly interested in sunlight and shadow and this perhaps might explain why the famous painting ‘The Goose Girl’ was accredited to him. So proud of this wonderful interpretation of a girl in a bluebell field was the National Gallery of Ireland that it adopted the image as their logo, only to finally have to accept that the painting was in fact completed by the Englishman Stanley Royle. He can be regarded as one of the great Irish ‘colorists’ as can be seen by his superb image: ‘Les Soeurs du Saint-Esprit, Concarneau’, c. 1910-1912 which has to be one of the finest of all Irish paintings. 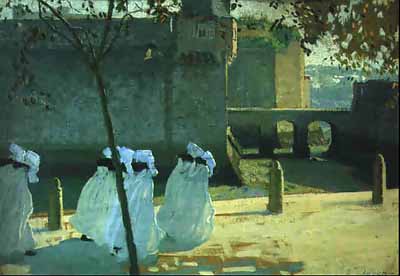 3 thoughts on “Osborne, Lavery and Leech – A Trio Of Irish Painters”