The Irish debt deal did not reduce the amount owed by the country. Ireland still owes in the region of 125BN Euro – a staggering figure that will take decades to pay off. The new debt deal merely allows part of the debt to be paid off over a longer term. 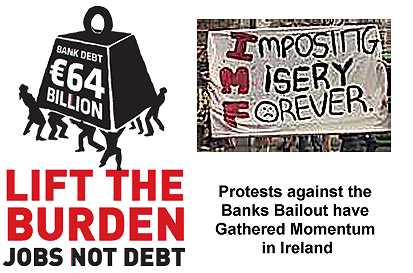 This is not necessarily a bad thing if you are able to ignore the immorality of it. By pushing the debt repayments down the road to the year 2053 the current Government has essentially lumbered today’s toddlers with the task of paying their parents debts. On the other hand, the breathing space that will be created by not having to pay as much as 2BN Euro annually over the next 10 years has given the current generation the opportunity to create jobs and growth to repair the damage sooner.

Under the deal the Central Bank of Ireland swapped high-yielding ‘Promissory Notes’ for longer-term Government Bonds. The original deal was to cost over 3BN Euro annually for the next 10 years. The new deal sees a reduction in the interest rate from 8% to 3% and stretches the loan out to 40 years. This reduces the borrowing requirement of the Government in the short term which it is hoped will free up funds for job creation.

The response in Ireland to the news of the deal has been broadly welcoming although those opposed to the whole concept of the Government bailing out the banks to begin with used the opportunity to demand that a write-down of Irish banking debt be sought immediately.

The Fine Gael and Labour Party coalition Government made the point that the European Central Bank has never agreed to debt write-down before so it would have been pointless to even negotiate on that basis. The more militant of those opposing the Government want to see an immediate default on the debt to force the issue with the ECB, EU and IMF.

This may yet happen.

The level of debt being carried by Irish citizens and small businesses is reaching catastrophic proportions. Although the economy of the country has stabilised it is still quite dreadful. Unemployment in Ireland is stuck at over 14%, Irish emigration is at pre-Famine levels and job creation is barely perceptible. The gamble by Fine Gael that they can soldier on in the hope that the economy recovers may backfire under an avalanche of personal debt and mortgage defaults. In such a scenario a massive default on the loans granted to us by our European ‘partners’ will become a question of ‘when’ and ‘how much’ rather than ‘if’.

Against this backdrop the much vaunted ‘Promissory Note’ deal may become just another footnote in this bizarre period of Irish history.