There are a number of theories about the origin of the term ‘Black Irish’. Almost all were intended as a form of insult or as a means of differentiating one particular group from another.

The theories regarding the origin of the phrase ‘Black Irish’ include:

1. Descendants of Viking and Norman invaders who eventually settled in Ireland may have been referred to as ‘Black Irish’. This is more likely because of the dark intentions of the invaders rather than their physical appearance.

2. One of the consequences of the disastrous ‘Spanish Armada’ in the year 1588 was that groups of Spanish sailors were literally washed up onto the western shores of Ireland. In cases where these darker-skinned foreigners integrated into Irish society it is possible that their offspring were referred to as ‘Black Irish’.

3. Over a million of the poorest Irish people emigrated in the 1840’s and 1850’s in the wake of the great famine in Ireland. The height of the famine was the year 1847 – known as ‘Black 47’. The potato blight that savaged the countryside turned the potatoes black. It is possible that the arrival of the thousands of desperate emigrants into America, Canada Australia and beyond resulted in their being labelled as ‘Black Irish’, trying as they did to escape the black death they left behind. 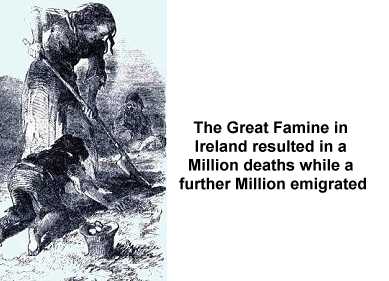 4. Irish Emigrants to the West Indies and their families have often been referred to as ‘Black Irish’.

5. Catholics in Ulster referred to the immigrant Protestants as ‘Black Irish’.

A further examination of this history of the Black Irish can be found at:
https://www.ireland-information.com/articles/blackirish.htm

3 thoughts on “Origin of the ‘Black Irish’”