Although the position of Mayor of Dublin is largely ceremonial with the office-holder yielding little if any real power the position does have a number of distinct benefits, including being a representative for the city at major public events. 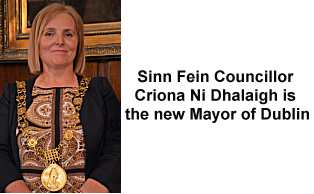 Perhaps there will be no larger public event in Dublin next year than the centenary celebrations to mark the 1916 Easter Rising. Councillor Criona Ni Dhalaigh is the Sinn Fein Councillor who was elected to the post and will officiate as the city’s ‘number one citizen’ during the many events that are planned.

Not everyone is happy with this turn of events.

Irish citizen Austin Stack is one such person. His father was killed by the IRA in 1983 and he has accused Sinn Fein of trying to establish a link between their Political Party and the rebels of 1916.

‘It’s nauseating to think that a person who is a member of an organization which supported the slaughter of thousands of Irish people over the last 40 years will now take a salute on a reviewing stand, on a day which remembers those who gave their lives for democracy and inclusiveness. (It would be)…very insensitive (to ask Gardai and Defence Forces to salute) …somebody whose organization supports the actions which led to their colleagues being murdered.’

He called on Councillor Criona Ni Dhalaigh to decline her invitation to be part of the ceremony in ten months time.

‘It is a hugely important year and I just want to reiterate – and we’ve said this until we’re blue in the face – that the celebration and commemoration of 1916 does not belong to any one single party. It belongs to the people of Dublin. My party has been celebrating 1916 for years, so it’s nothing new to us. We will commemorate it, and the important thing is that the people who do commemorate the brave heroes of 1916 do so in a fitting manner.’