‘One of the Architects of Modern Ireland’

‘As fine an Irishman as there has been’ 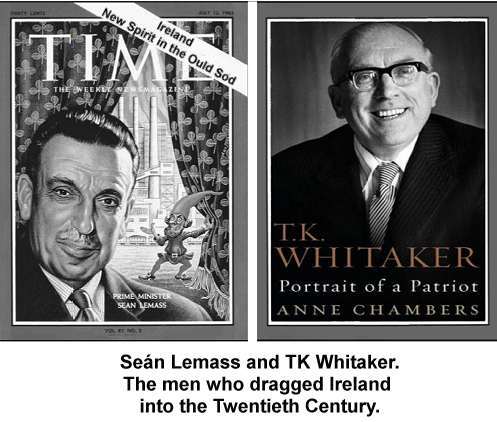 The plaudits continue to arrive in tribute to TK Whitaker who was easily the most influential civil servant in the history of the Irish State.

The former Secretary of the Department of Finance also served as Governor of the Central Bank, but will perhaps be most remembered as one of the driving forces behind the ‘First Program for Economic Expansion’ from 1958 to 1963.

Ireland of the 1950’s was a very backward place. The declaration of an Irish Republic in 1948 had not brought a major improvement in the standard of living from that experienced under British rule. The memory of the bitter Irish Civil War ensured that the those in favor of and opposed to the ‘Anglo-Irish Treaty’ of 1922 remained suspicious of and divided from their fellow countrymen and women.

Ireland had remained neutral during the second World War, and was to pay a price economically and psychologically for this stance, as the country remained somewhat excluded from the realm of European nations.

When Sean Lemass became Taoiseach in 1959 he found in TK Whitaker a like-minded progressive who was determined to get something done and who had as early as 1957 compiled his document outlining his economic proposals. Together they implemented the economic plan that included a major switch from protectionist policies to those of a free market, with Lemass significantly signing the GATT (General Agreement on Taxes and Tariffs) in 1960.

Ireland then joined the European Free Trade Association while the IDA (Industrial Development Authority), was expanded and tasked with attracting foreign direct investment into Ireland, proving to be a remarkable success over the last half century.

Antiquated policies such as the 1932 ‘Control of Manufacturers Act’ were removed. This legislation required that any Companies established in Ireland had to be at least partially Irish-owned. Lemass and Whitaker saw this as a barrier to free trade and removed it.

Grants to Irish farmers and businesses to enable them to modernize were made available.

Regional Technical Colleges were established, (several of which are now making the transition to full University status).

Free Child Benefit payments were introduced in 1963 and free secondary school education in 1969.

Lemass also looked to Britain and in 1965 signed the ‘Anglo-Irish Free Trade Area Agreement’ that abolished tariffs between Ireland and the UK, an agreement that was to have tremendous economic benefit for Ireland. And one which is now facing a degree of uncertainty in the face of Brexit.

The results of these economic changes were staggering.

By the end of the program Irish exports had risen by a massive 35%.

Ireland had finally been modernized with the transition from backward near-third-world economy into one that could look forward to EEC (forerunner of the EU) membership and taking its place among the developed world states.

TK Whitaker had been at the very heart of this change with his near-revolutionary vision for economic change being championed by the willing Sean Lemass.

He also served as Chancellor of the National University of Ireland from 1976 to 1996 and in Seanad Eireann from 1977 to 1981. He was President of the Royal Irish Academy and a member of the board of the National Gallery of Ireland.

He had married Nora Fogarty in 1941 with whom he had six children and after her death in 1994 married Mary Moore in 2005. He died a month after his 100th birthday.

TK Whitaker was conferred with the title of ‘Irishman of the 20th Century’ in a public vote in 2001, such was his enduring influence over the lives of the Irish people.