The morning air had a quality only found on an island: cool yet warmed by the rising sun and the rocks still giving off yesterday’s heat. The three men tramped up the gravel track, the slope steeper as they neared the western end of the island.

The sun was diagonally behind them, low enough to pick out in detail every feature of this rough and ready place. To the left the light was reflected in a sparkle from the surrounding seas. Ahead the cliffs rose to breast the Atlantic. To the right the bulk of the island swelled steeply upwards like a whale’s back, the sparse grass, rushes and heather pushing up between the rocky outcrops through the thin living layer, reminding all who passed that wresting an existence from this soil meant unceasing toil. The patient sheep grazed and bleated, wanting rid of their thick winter coats. 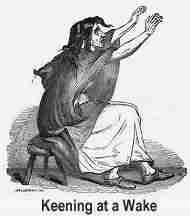 “And wasn’t that a grand wake now, last evening?” asked Mick Mickey. More a statement than a question, in honour of the dead man and his family and to mark the fact that they had given old John a good send-off. Michael Gerry nodded assent.

The Outsider recalled the previous evening. He had arrived on the island unannounced and had been offered lodgings at Mick Mickey’s. At dusk they had tramped up this same path to where Old John had been laid out in his home. The cottage crouched under its thatch, pressing itself down, away from the gales crashing in from the Atlantic. A single-storey cottage, whitewashed on the outside and with a bright red door, surrounded by exotic fuchsias that seemed out of place in this land of greens, greys, blues.

Old John had been laid out in his coffin, dressed in his Sunday suit, surrounded by candles. The eldest daughter, her mother long dead, had the responsibility for the wake – helped by the neighbours. They had seen to a plentiful supply of cake, tea, tobacco, whiskey… plus some arcane potions distilled locally without the intervention of the excise men.

The women had been gathered round the bier. Theirs it was to wail and keen, joined at intervals by newly arrived men who would recite a decade of the rosary for the dead man’s soul. The Outsider went in with Mick Mickey and did his best to participate. His contribution went no further than kneeling down, joining his hands and half-closing his eyes, while the Paters, Aves and Glorias buzzed around him like a swarm of bees, the high women’s voices alternating with the men’s grumbling throats as they prayed their relays with the skill born of many years’ practice. A non-believer, he felt nothing for the ritual, but he could imagine that the repetitive drone of half-understood formulae could bring about a certain peace of mind, convince the participants that they were doing something meaningful, as the marathon runner must feel after passing the finishing line having taken fifty-thousand identical steps to get there.

Once they had done their duty the men retired, leaving eternity’s business to their womenfolk. They gathered in the kitchen, the air thick with tobacco smoke and the fumes of alcohol. This was the socially important part of the ceremony, where Old John would be set into the minds of the surviving islanders. The Outsider observed quietly, marvelling at this rich collection of individuals. Not that these people were rich in terms of money: they simply had a richness about them. They smelt rich, felt rich, sounded rich, moved richly. His own people at home smelt… well, they smelt too, but the smell usually came out of a bottle. These people smelt warm, like contented cows. The people at home felt and looked rich on the outside: soft clothing, soft skins, warm handshakes. Here they looked solid, little regard for clothing except as protection against the elements, skin like the bark of an oak, grooved and greyish-brown. And they were sparse in their rich touching – perhaps no more than a handshake from a calloused hand. Here an arm around your shoulders was like being included in the honours list. The people back home moved like the White Rabbit continually glancing at his watch. Here they moved richly, slowly and ponderously, counting each step, measuring effort required and advantage gained. Watches and clocks were scarce. Their speech was rich and colourful.

Sure, he was a grand man, was Old John.
Sure, he was indeed. You would have thought that Bridie’s death would have finished him off.
You would, too.
Not John. He knew what was what. He was made of stern stuff.
Well, you may be right, but surely to God he knew little about sheep.
That’s no surprise. He had the cows.
He had but three cows, to be sure.
Aye, but he knew them. And he had the best grassland.
And he knew about vegetables, sure he did.
Now what use is vegetables? A man needs good red meat to keep him on his feet.
And the Guinness!
To knock him off his feet, more likely.
Aye, but John knew all about that too. Sure, didn’t he need five pints before that recitation of his?
You can talk, Mick Mickey. We don’t get a peep out of you till you’ve chalked up ten pints.
Ach, but Old John could hold his drink a treat. And he knew when to hold off, so he did.
So you didn’t see him when young John came back from Australia?
Sure, I did. He was still in O’Brien’s at six the next morning!
Ach, a father needs to celebrate at a time like that, sure he does.
Aye, that’s true enough. And Old John was never one to throw good money away on drink.
Sure he wasn’t! Never known to pay for the last round!

The to-and-fro remarks were punctuated, sometimes by laughter but mostly by deep silences and quiet guffaws, back of the hand against the mouth. The men were re-telling John’s life story. As they remembered him. The Outsider had nothing to contribute except his respectful presence. Despite his fairly frequent visits to the island he had not known Old John except by name. Now his contribution consisted, once again and for the umpteenth time, in a sense of wonder at how this tiny isolated society had managed to continue to exist with its unspoken and unwritten customs intact, its uniqueness untouched.

He listened as the remarks and quips flew across the room. This was neither eulogy nor condemnation. It was the beginning of an oral tradition that would immortalise Old John for as long as people lived here.

It had been late when they left the wake. Michael Gerry had accompanied Mick Mickey and the Outsider home, weaving a familiar path down to the sea-level northeast end of the island. They had passed Michael Joe’s cottage, and the Outsider had thought he recognised a few places where Michael Joe had extracted lethal bottles of home-brewed liquor from the bog the previous summer, all the while conducting a discussion on the rival merits of Plato, Aristotle and Sartre, and any philosophers in between. By now, thought the Outsider, this island has no more surprises for me. He was wrong. 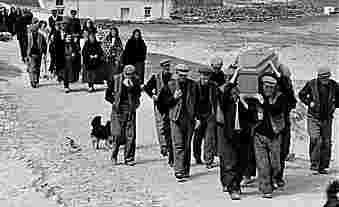 The three of them had covered the last mile in silence. As they neared Old John’s cottage the coffin was being carried out on broad shoulders, over the spine of the island to the church and graveyard. Nobody hurried. There was no traffic. A few people working in the fields uncovered their heads, stood still until the procession had passed and then resumed work. Or laid down their implements and joined the procession.

The church was full, most of the congregation unknown to the Outsider. The Requiem Mass was standard, the kind of ceremony you would get anywhere in the world. The Outsider found it incomprehensible, even more so than the rosary of the previous evening and far less significant than the exchanges between the men in Old John’s cottage. He disliked it. He looked around for the face he hoped he knew best. The face was absent.

The Outsider was on the back row of the benches in the tiny church. When the service ended he was first out. He found the face he had been looking for: Michael Joe, sitting on the ground with his back against a dry stone wall, puffing at his pipe, disreputable hat on his head, eager panting dog with lolling tongue at his feet, bicycle propped next to him against the wall.

“Were you not inside, Michael Joe?” asked the Outsider.

“I was not. Sure it’s better out here. You can hear it all drone on and know where they’re up to – gives you a chance to light the old pipe at strategic times – but you don’t have to listen because you’ve heard it all before. And it gets no better. Anyway, out here I have the dog and the pipe and the rest of the universe around me. That gives me more cause to contemplate life and death than the words of our beloved parish priest, no matter how well-intentioned he may be.”

The men gathered round in a loose circle and lit up cigarettes and pipes. The women stayed behind at the church door in a clump, quietly whispering among themselves. Michael Gerry and another of the young men, Michael Bob, took centre stage as if on a signal, doffed their jackets, spat on their hands and started to dig.

It dawned on the Outsider that for the purposes of burial the two men were the gravediggers. And how the devil will they do that here? he asked himself. The island is a lump of solid rock. You’d need dynamite to dig a grave.

But he had still more to learn. Though the church was built on rocky foundations its tiny graveyard easily yielded to the combined spades. When the two lads were about three feet down they slowed their pace and began to dig carefully. The reason soon became apparent: they were unearthing human bones. These were laid with a fair degree of reverence and care – and in comparative silence – on top of Old John’s coffin, until a skull came to light.

– Would you look at that now?
– Sure an’ all, it must be old Padraig.
– D’you think so?
– Och, it must be. He’s been gone now all of…
– Must be eighty years.
– Well, he’ll be having another burial today. Not everybody can do it twice…

And the discussions continued quietly until the hole was deep and wide and long enough for Old John. Then – a signal the Outsider missed – the women filed out of the church and ranged themselves with the men around the grave. The coffin was lowered, Old John’s remains on their first step towards slowly becoming one with the foundations of the ancient island. The unearthed bones were carefully returned and the soil and rocks shovelled over them.

The congregation remained awhile, heads bowed. Men took off their hats and caps. Praying? The Outsider was not. He was quietly and – he hoped – unobtrusively observing. So was Michael Joe, still wearing his disreputable hat, smoking his pipe but making no effort to be unobtrusive. The observer, the recorder of otherwise unrecorded history.

At a second imperceptible signal, like a cloud of starlings wheeling with perfect precision, the congregation turned and began, in ones and twos, to exit from the graveyard.
“Coming?” asked Mick Mickey.
“Where to?” asked the Outsider.
“The pub.”
There was the long trek downhill to the harbourside pub and the comfort of the foaming pints.

2 thoughts on “‘The Outsider’ – An Irish Story by Michael Collins”