In a bizarre sequence of events that has made international news the Irish Government is actively refusing 13BN Euro in back-taxes from the Apple Inc. The maker of the iPad and iPhone has been accused by the European Commission (EC) of tax evasion and ordered the Internet giant to pay the money to the Irish treasury. 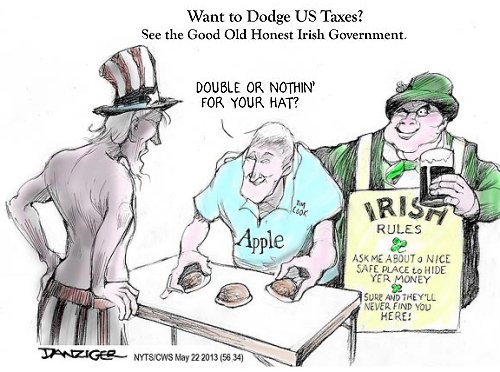 Of course, this being Ireland, the Government has decided to refuse the cash and instead is launching an appeal against the EC’s ruling, and effectively on behalf of Apple!

Needless to say this has caused a large degree of consternation among the Irish citizenry with some commentators pointing out that 13BN could effectively solve the homeless crisis as well as build an airport train link.

However, regardless of the attraction of a short term grab of Euros it seems that the decision by the Government to dispute the EC ruling is based on logic, even if many people disagree with that logic.

By attacking this EC ruling the Irish Government are positioning themselves as the defender of the multi-nationals (in Ireland at any rate). This is not an unimportant consideration where multinationals such as Google, Microsoft and Apple have enormous presence, creating tens of thousands of jobs and helping to stimulate economic activity wherever they locate in the country.

The Government also view the EC ruling as a direct assault on the Irish 12.5% Corporate tax rate that has rankled with the French and Germans in particular for many years, and who are among those countries that want to see a harmonized EU Corporate tax regime.

Ireland is completely opposed to this with the imperative to maintain the competitive advantage all the more pressing in the wake of the UK Brexit and the likelihood the UK Government will also reduce their Corporate tax rate.

Like Brexit this EC-Ireland-Apple battle could take years to play out so the chances of any bumper paydays for Ireland seem a long way off yet.

Those who are opposed to Ireland battling the EC on behalf of Apple point out that this huge US company has effectively paid a mere 0.01% of tax in Ireland and not the headline 12.5% Corporate tax rate that is so often mentioned.

Several US senators have labelled Ireland as a ‘tax haven’ with the undercurrent to the realpolitik being that these huge companies are seeking, and actually, paying a miniscule amount of tax relative to their profits, in the face of the ethical and moral questions that such tactics raise.