Of the many stories of revolutionaries that emerged from the early part of the twentieth century in Ireland one of the most remarkable involves the woman who was born Constance Gore-Booth in 1868.

She was born in London to Sir Henry Gore-Booth, the famous arctic explorer, who was an Anglo-Irish landlord. Her father was not typical of his type and administered his lands with a degree of compassion for the peasantry who farmed it.

Such was his mercy that he is reported to have provided famine relief at his estate in Sligo during the famine of 1879. This act undoubtedly inspired humanity and concern for the poor in his daughter. Living in Sligo the family were friends with the family of W.B. Yeats, the romantic Irish poet. He later wrote the poem 'In Memory Of Eva Gore-Booth and Con Markievicz'.

The young Constance initially studied painting in London in 1893 where she became involved in the issue of suffrage for women, joining the 'National Union of Women's Suffrage Societies'. She continued her artistic studies in Paris in 1898 where she met Count Markiewicz, who was a Ukrainian aristocrat of Polish origin. They wed in 1901 after which she assumed the title Countess Markievicz. The couple settled in Dublin in 1903 where the Countess co-founded the 'United Artists Club' which was a cultural and artistic organization. It was perhaps inevitable that while circulating in such society she would be exposed to the revolutionary ideas that were being swept along with the Gaelic revival of the time.

In 1908 she joined Sinn Fein and Inghinidhe na hEireann - 'The Daughters of Ireland', which was a revolutionary group established by Maud Gonne, with whom she later acted at the fledgling Abbey Theatre. She continued to participate in the Suffragette movement in England and by standing for election she helped to defeat Winston Churchill in a 1908 Manchester by-election.

It was in 1909 that she established the radical 'Fianna Eireann' which was aimed at instructing a youth army in the use of firearms. She was jailed by the British authorities in 1913 after speaking at an IRB rally to protest the visit of George V to Dublin. She had also joined the Irish Citizen Army (ICA) established by James Connolly in response to the 1913 'lockout' of workers. She established soup kitchens and aid for the Dublin poor, often using her own funds. Her marriage had by now disintegrated with her husband returning to Europe in 1913.

The Countess became a Lieutenant in the ICA and participated in the Easter Rising of 1916 where she was second-in-command at the fight on St. Stephens Green. Initially the rebels dug trenches in the green but soon retreated from this position once they were became vulnerable to snipers positioned on the high buildings around the enclosed green. Under the command of fellow ICA member Michael Mallin they occupied the Royal College of Surgeons, rebelling for a total of 6 days. They surrendered only when they received a copy of Padraig Pearse's surrender order. 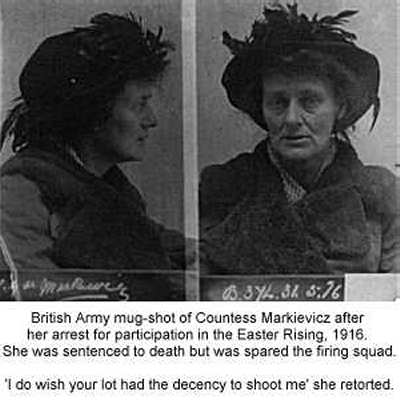 The Countess was jailed in Kilmainham and sentenced to death but her sentence was commuted on grounds of her gender. 'I do wish your lot had the decency to shoot me' she retorted. She was released from prison in 1917 by which time the tide of support had turned in favour of the rebels and the path to independence was set.

In 1918 she was again jailed for her anti-conscription campaigning but upon release was elected to the English parliament, refusing to take her seat. She was the first woman to be elected to the House of Commons. She was a member of the first 'Dail' (Irish Parliament) in 1919 and became the first Irish (and indeed European) Cabinet Minister, serving as Minister for Labour from 1919 to 1922.

Countess Markievicz joined deValera in opposition to the Anglo-Irish Treaty of 1922 which partitioned the country and fought in Dublin in the ensuing civil war. She was again imprisoned but this time by her former comrades-in-arms. Upon her release she became a founder member of Fianna Fail and was elected to the fifth Dail in 1927. deValera had by this time changed tactics and intended to participate in the parliament.

The Countess however, never got her chance when, at the age of 59, she died of tuberculosis (or possibly appendicitis) in July of 1927. She likely caught the disease while working in the Dublin slums. Her husband and family were by her side.

The famous Rebel Countess was buried in Glasnevin Cemetery with a huge farewell crowd of 300,000 in attendance at the north Dublin graveyard, the final resting place of so many of Ireland's great patriots.