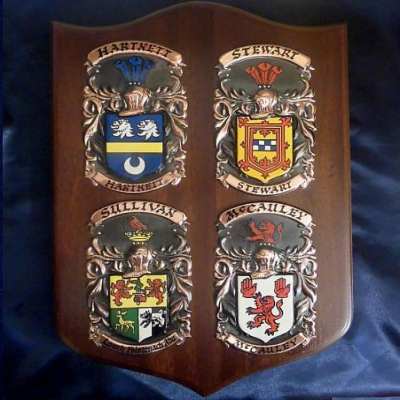 Incredible Gifts that are hand-made in Ireland. Show off your Irish Heritage.

The Origin of Irish Family Names

The 100 Most Popular Surnames in Ireland

It is a help when tracing your family history to know something about the origin of and evolution of Irish names and particularly how names have changed over the centuries.

Early times: In ancient Ireland the population was much smaller than today and the mass movement of people was uncommon. It was usual therefore for a person to be known only by one name: Niall, Eoin, Art, etc. Once there was no one else in the locality with the same name then this was not a problem.

The Gaelic Clann system was well established and this gave people a common identity with their people of the tribe and with the commonly shared area. This single name system began to break down during the eleventh century as the population was growing and there was a need for a further means of identification. The solution was to adopt a prefix such as Mac (Mc is an abreviation) or Ó. Mac means 'son of' whilst Ó means 'grandson of'. Mac surnames are generally of a much later date than Ó. The vast majority of Gaelic Irish surnames were created during the eleventh and twelfth centuries.

It should be noted that the Scottish Gaels were actually descendants of Gaelic emigrants to Scotland. The word 'Scotus' is Latin for 'Irishman'. Scottish settlers who moved to Ireland (and especially Ulster) may already have been of Gaelic Irish descent.

Septs: The Clans eventually broke up into a number of distinct septs or groups. These groups were headed by an original member of the clan and dominated a particular part of the countryside. It was not uncommon for septs from the same clan to be found in completely different parts of the country (O'Connor for example) so it is important when researching your roots to try to find out the original part of the country that your ancestors came from as this may be a completely different area from that where the 'major' sept was domicile

The sept system was an integral part of Gaelic society and survived and was even propagated by the Norman invaders. The system did not survive the English invasion and colonisation of the seventeenth century however, and it became a disadvantage to have a Gaelic sounding name.

Anglicization: The Penal laws that were enforced by the colonists attempted to completely subjugate the Gaelic way of life. It is about this time then, that many Gaelic names changed to their Anglo equivalent or translation. This can cause confusion as many of the names were misinterpreted or misspelled. The name McEaneny for example has a number of variants including McAneny and Bird (the Irish word for bird is éan). Mac an Thomáis was converted to Holmes, Mac Giolla Íosa to MacAleese, etc. The conversion of names beginning with Mac and Mc was even more difficult because the removal of the M sound from the name often completely changed the sound of the name.

The revival of Gaelic consciousness in the later eighteen hundreds saw many Irish families reassume the Mac, Mc, Ó or other Irish form of their names although this was reduced in a number of cases depending on the sound of the name (Kelly is still much more prevalent than O'Kelly, Murphy more prevalent than O'Murphy, etc.)

Surnames today: There are many different origins for Irish names today but the vast majority can be broken down into either of three categories: Gaelic Irish, Cambro-Norman, and finally Anglo-Irish.

The Table shown here gives a listing of the 100 most commonly names found in Ireland and their meanings. These details were compiled from the Matheson report.