The quest for a Socialist society was always at the heart of everything James Connolly tried to achieve.

He was born into an Irish immigrant family in Edinburgh, Scotland in 1868, his parents having emigrated from County Monaghan. The Cowgate district of Edinburgh where the family lived was a notorious slum with few opportunities. He left school at the age of 10 years and, like so many of his Irish compatriots found that the only means he had of making any kind of a living was to enlist in the British Army. He lied about his age and enlisted at the age of 14 years old. He served in Ireland in the 2nd Battalion of the Royal Scots Regiment during the rural unrest at the time of the Irish 'Land War'.

He despised the British Army and deserted when he learned that his Battalion were soon to be transferred to India. He escaped to Edinburgh with his soon-to-be wife Lillie Reynolds. It was there that he became involved with the Scottish Socialist Federation and began a life of organizing and campaigning. In 1892 he had the opportunity of a job as secretary to the Dublin Socialist Club, a job paying a pound a week, so Connolly moved with his family to Dublin.

This club evolved into the Irish Socialist Republican Party which Connolly helped found. But Connolly became so frustrated with the lack of progress with the ISRP and the continuing inequality in Ireland that he emigrated to New York in 1903. He founded the Irish Socialist Federation in 1907 and during these years he toured, lectured and wrote about socialism and his ideals, among them the oft cited 'Labour in Irish History'.

He returned to Dublin in 1910 and joined James Larkin in the fight for workers rights in Dublin, fronted by the Irish Transport and General Workers Union. The 1913 'Lockout' was a pivotal moment in Irish history and it involved over 20,000 poor, working class citizens standing up for their rights against the might of the established Dublin employers, fronted by William Martin Murphy.

Despite the breaking of the strike, the attitude of defiance against injustice that had been generated continued to be stoked by not just those in the Socialist movement but by the organizers of the planned rebellion against British rule, culminating in the 1916 Easter Rising. It was during the Lockout that Connolly helped found the Irish Citizens Army, who were trained to defend workers and protesters engaged in marches and strikes. He had earlier founded the Irish Labour Party in 1912. He opposed the First World War on socialist ideals. 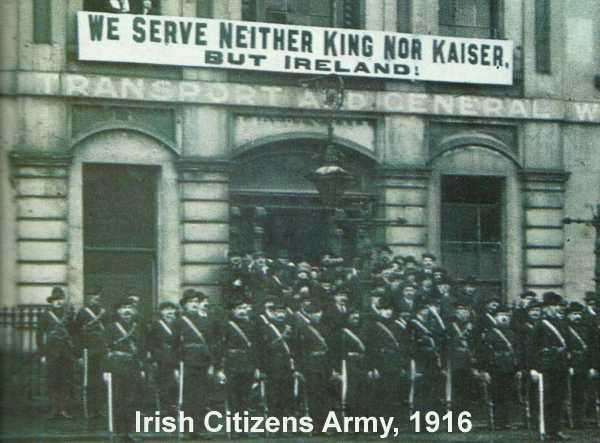 Connolly was skeptical of the leadership of the Irish Republican Brotherhhood (IRB), who had already began hatching their plans for a rebellion. He goaded them, resulting in Tom Clarke and Padraig Pearse meeting with Connolly to see if a joint action could be arranged. They agreed that together they would strike at Easter.

The Easter Rising began on 24th April 1916 with Connolly as Commandant of the Dublin Brigade. It was this band of the rebels that would see most of the fighting action so Connolly was in effect the de-factor commander of the rebellion. His leadership of the rebels was legendary.

The rebellion failed when the British army brought the gunboat 'The Helga' up the River Liffey and pounded the GPO where the rebel leadership were stationed.

Connolly was sentenced to death for his part in the rebellion. Despite being seriously injured, he was propped up in a chair and executed by firing squad in Kilmainham jail on the 12th May, 1916. The execution of the rebel leaders was a turning point in Irish history. In the wake of the destruction of large parts of Dublin city the rebels had been castigated by the majority of Irish people for their actions, but, once they became martyrs then public opinion changed rapidly.

The account of Connolly being carried out on a stretcher, already near to death, and tied to a chair before being shot particularly resonated and stoked the fury of the Irish masses. The War of Independence, the subsequent Civil War and ultimately the creation of the Irish Republic in 1949, can all be traced to the Easter 1916 Rising.

James Connolly is always remembered as being one of the leaders of the 1916 rebellion, but his teachings have also been widely adopted by a number of socialist groups in Ireland. Critics of his philosophy claim he was an extreme socialist, a Marxist even. He envisaged socialism as Industrial Union control of production and envisaged an independent Ireland as a socialist republic.

'If you remove the English army tomorrow and hoist the green flag over Dublin Castle, unless you set about the organisation of a Socialist Republic your efforts will have been in vain. England would still rule you. She would rule you through her capitalists, through her landlords, through her financiers, through the whole array of commercial and individualist institutions she has planted in this country...'

He gave his life in his quest for the freedom for Ireland and his search for a Socialist society.
View Your Irish Surname Coat of Arms