The Vikings originated in Norway and Denmark and began their legendary raids during the eight century. The history of the Vikings in Ireland stretches back to that time and culminates with their defeat by Brian Boru at the Battle of Clontarf in the year 1014.

The earliest recorded raid from Vikings out of Norway was in the year 795 at Rathlin Island off County Antrim. 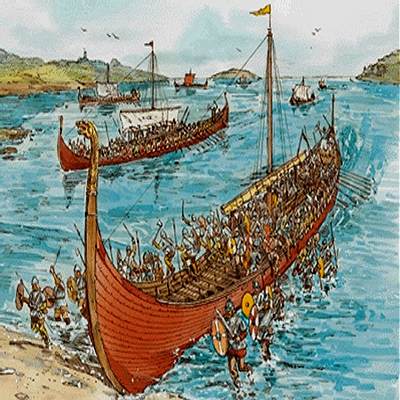 In the year 798 they raided the kingdom of Brega near the northern part of Dublin. These initial raids involved rapid landings, then plundering the local settlements and Monasteries before retreating back to the sea.

The Scottish isle of Iona was also attacked in the same year. By the year 802 the raids had stretched around the western coast as far as Skellig island and the ancient Monastery there.

By the year 832 an intensification of the attacks occurred with fleets of Viking ships arriving at the Boyne, at Dublin and travelling the Shannon estuary. They took supplies, riches and slaves.

Early Viking leaders who raided Ireland include Saxolb in the year 837, Turges in the year in 845, and Agonn in the year 847. By the end of the ninth century the Vikings began to establish settlements known as 'longports' along the Irish coast. These were essentially coastal forts that protected the Viking boats. The earliest of these were at Linn Dúachaill (Annagassan) in County Louth and Duiblinn on the River Liffey, the forerunner of what would become Dublin, the capital city of Ireland.

The word Viking is taken from the Norse word 'Vikingr' which means 'sea-rover' or 'pirate'. Their longboats gave them an advantage that other sea-faring peoples just could not match. Their fierce attacks must have instilled terror into the local population and especially at the Monasteries where much of the wealth they craved was located. It is no coincidence that the number of high-towers built for protection in Ireland greatly increased during this era.

By this time the Viking Chiefs Olaf and Ivar controlled the raids, some bringing as many as 1500 fighting men in many longboats - a veritable army.

The Irish chieftains now began their defence in earnest since, as the Vikings had begun to make semi-permanent settlements they had become a much easier target. The Irish chieftain Máel Seachnaill is recorded as having routed the Vikings at Skreen in County Meath, putting over 700 of the invaders to death. Alliances between the Vikings and the Irish chieftains became commonplace as the presence of the norseman became a political inevitability to be acknowledged and dealt with.

By the year 849 invaders from Denmark had begun to attack not only the Irish but also the more established Vikings of Norwegian origin. By 853 'Olaf the White' had assumed control of Dublin. He married the daughter of Áed Finnliath, king of the northern Uí Néill. Decades of warfare with some victories and some defeats for the Vikings followed. In the year 902 the Irish defeated the Vikings at Dublin.

A second wave of attacks began in the year 914 with a large fleet of Vikings ravaging Munster. Over time the Irish fought back with some success. The Dublin Vikings were attacked by the King of Tara, the city sacked in the year 944.

The stage was set for a great showdown between the two cultures with Brian Boru of Dál Cais in County Clare being the spear-point of the Irish attack. He had already defeated the Vikings in Munster. His great rival was Máel Sechnaill II, King of Tara. They reached an accord in the year 977 that Brian Boru would rule the southern part of the country with Máel Sechnaill II ruling the northern part.

They even collaborated on a raid against the Dublin Vikings in the year 998. By the year 1000 Brian Boru had put down a revolt by the Dublin Vikings, defeating Sitric and eventually forcing Máel Sechnaill II to acknowledge him as the High King of all of Ireland.

The Leinster Vikings again revolted in the year 1012 but were once again defeated. They knew that their time was limited so they sought help from Sigurd, Earl of the Orkneys, who arrived in the early part of 1014 to face the Irish.

The famous battle of Clontarf ensued with the Irish squaring up to Sigurd, Brodar and Ospak who were Vikings of the Isle of Man. With Brian Boru, Brodar and Sigurd all killed in the fierce battle that followed the Vikings were eventually defeated, the battle entering the pantheon of myth and legend of Viking history. 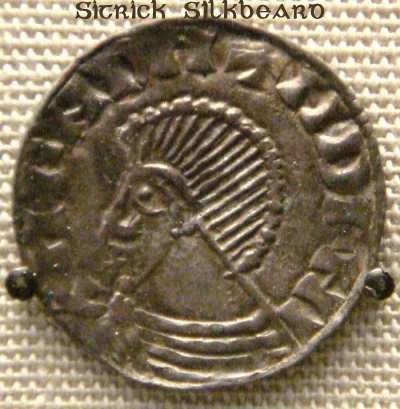 Estimates of the number of dead range from 6000 to over 12000, a huge number for warfare of that time. The Viking defeat at the battle of Clontarf effectively signalled the end of Viking rule in Dublin and thus throughout the country.

Long before this battle though the inevitable integration of the two cultures had begun. The invaders even assimilated the native Christian religion, forming alliances, marrying and eventually settling among the native Irish.

The legacy of the Vikings in Ireland is extensive. The towns of Dubin, Cork, Wexford, Limerick and Waterford that were initially founded by the Vikings all developed into the major cities of the modern era. 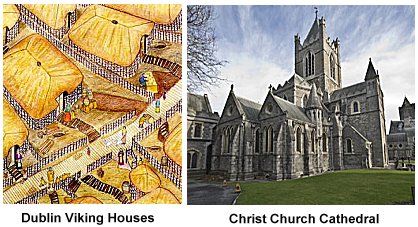 A full-scale invasion of the island was never attempted as the Vikings had matters in England and France to deal with. Thus, despite the attacks, the native Irish chieftains continued to prosper and make treaties, war with each other and the Vikings, sometimes allying with the 'norsemen' against rival chieftains.

Coinage was first used in Ireland during the Viking era further providing evidence of the degree to which the Vikings changed from being raiders to merchants and settlers. Dublin was especially transformed by their presence, with Christ Church Cathedral being built by Sitric. The layout of the city centre today is much as it was originally designed by the Vikings.

Further proof of their integration survives the centuries through the use of surnames. Families of McAuliffe (son of Olaf), McManus (son of Manus), Doyle (the dark stranger or foreigner), McLoughlin (son of Lochlainn) and McIvor (son of Ivor) are just a few of the many 'Irish' names that have deep roots within the Viking heritage.

The death of Brian Boru marked a period of further fighting among the native Irish culminating with the Anglo-Norman invasion in the year 1169 and the beginning of a new period of warfare. It is a tragic fact of Irish history that the various chieftains and tribes remained so divided, unwilling to create a central leader or kingship capable of unifying opposition on the island to the centuries of foreign invasion and hostility that were to follow.
View Your Irish Surname Coat of Arms