Dermot MacMurrough and the Norman Invasion of Ireland

Dermot MacMurrough was the King of Leinster during the twelfth century and is most remembered as the man who invited the English into Ireland.

He was born circa 1110 and succeeded to the throne of his father, Enna, in 1126. He was a ruthless leader and demonstrated the ferocity of the times by killing or blinding 17 rivals in 1141. He became involved in a dispute with the King of Breffney, Tiernan O'Ruark, whose wife he kidnapped in 1153. O'Ruark formed an alliance with Rory O'Connor who was the recognised High King of Ireland at the time. In 1166 this long-running and bitter feud resulted in MacMurrough being driven into exile by the Gaelic Chieftains. He fled to France. 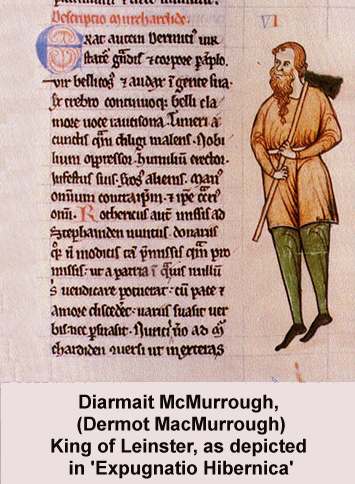 Dermot MacMurrough was a deeply ambitious man who refused to accept his exile. He made his way to the Court of Henry II of England and offered to become a vassal to the King in return for military aid in retaking his kingdom. The king did not directly provide assistance but allowed MacMurrough to petition the Anglo-Norman lords. It was at this time that the Earl of Pembroke, Richard de Clare, later known as 'Strongbow', agreed to lead an army to Ireland. MacMurrough brought an advance party of adventurers back to Ireland in 1167, recaptured Wexford, and waited for Strongbow to arrive.

From his base in Wales Strongbow launched an offensive in 1170, capturing Waterford and Dublin, taking control of the East coast, much to the dismay of the Gaelic Chieftains and O'Connor. To cement the alliance, MacMurrough married his daughter Aoife to Strongbow, in Christchurch Cathedral in Dublin 1170.

The Irish Chieftains did not allow the invaders to settle however and they were continually attacked and harassed. At one stage it seemed likely that they would be driven from the country if it were not for the support given by Henry II, who had become concerned with the amount of power and influence that Strongbow was amassing across the Irish sea. It is speculated that Henry II feared that Ireland might be used as a base by the Saxons to launch an offensive back into England in the wake of their defeat at Hastings in 1066. The subsequent domination of South Wales by the Normans was a result of the need to keep supply lines into Eastern Ireland open.

Dermot MacMurrough died in 1171 leaving Strongbow to declare himself King of Leinster. His later support for Henry II in France led to his being named Governor of Ireland. He died in 1176 suffering an infection during a raid by Irish rebels.

Much of Ireland was still under local influence and it only was the East coast, known as 'the Pale', that remained in Norman control. Henry granted these lands to his son 'Jean Sans-terre' (or John Lackland) in 1185 creating the 'Lordship of Ireland'. It seemed likely that Ireland would remain a minor Kingdom except that fate intervened. The death of his elder brothers allowed Jean Sans-terre to succeed to the English throne, becoming King John of England and the Pale becoming part of English dominated territories. 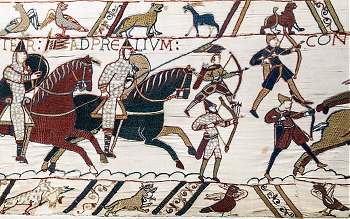 Demot MacMurrough has for centuries been blamed as the man who caused, or at least facilitated the invasion and subsequent subjugation of Ireland by outsiders. Recent revision of this history however, have been less critical of his actions.

It is likely that the island would have eventually been dominated by its larger neighbour even without Dermot MacMurroughs prompting. The unwillingness of the Gaelic Chiefs to form a Kingship with defined rights of succession certainly made invasion and domination easier. It was also not uncommon of the times for Gaelic Chiefs to seek help from foreigners in combatting their local enemies.

Despite this more generous interpretation of his actions, it will always be Dermot MacMurroughs lust for power, bringing the English into Ireland, for which he will be most remembered.
View Your Irish Surname Coat of Arms