Saint Brigid of Ireland, also known as Saint Brigid of Kildare is the female Patron Saint of Ireland. Known as Bridey, Bridget, Mary of Gaels, Biddy, Bríd and Breed, Saint Brigid was born in the year 451 near Dundalk to a pagan Gaelic Chieftain named Dubtach (later anglicized as Duffy), and to a Christian slave mother named Brocca (also Brocessa or Brocseach), who was sold soon after Brigid's birth. She was baptized by Saint Patrick with whom she was to become friends. 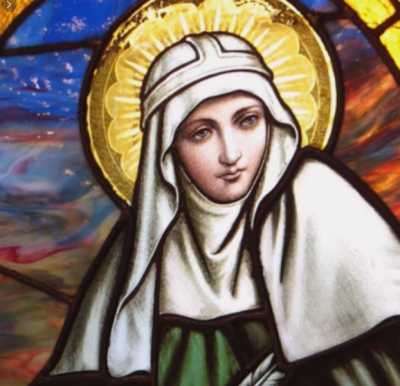 Legends of her holiness abound. One such tale recalls how the baby Brigid would vomit when a Druid tried to feed her, such was the impurity of the Pagan Druid. When older she was constantly giving away her food and clothing to the poor, on one occasion performing the miracle of having the food-stocks she had taken from the kitchen replenished.

As a child the young Brigid enjoyed a certain position of some comfort and privilege, the family being in receipt of financial support because of their position of authority. Upon reaching adulthood however, she assumed a role of servitude and was charged with caring for her father and family.

She never forgot her mother however and, despite being forbidden to do so she left the family home, located her mother, negotiated her release from slavery and returned home to her fathers house. To her dismay, her father had arranged her marriage to a poet, he being among the most prestigious men of the time. Brigid had already vowed to remain celibate and to do God's work so once more, she left her home, this time forever. 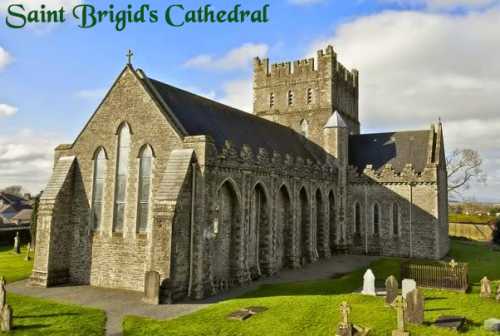 Together with seven other dedicated women she formed the first ever female Monastic community in Ireland in the year 468. They helped the poor of the time and were attributed with many miracles.

Despite having limited resources they never seemed to be without food or supplies for their good works. She founded a school of Art and a Monastery at Cill Dara (meaning 'the Church of the Oak'), about which the modern town of Kildare now stands. It is thought that this was the exact same site that a shrine to a Celtic Pagan Goddess named Brigid also stood. During this time the Abbess of Kildare was regarded as superior general of the monasteries in Ireland, an incredible position for any woman to occupy.

Her friendship with Saint Patrick was well recorded in the ninth century 'Book of Armagh':

'Between St Patrick and Saint Brigid, the pillars of the Irish people, there was so great a friendship of charity that they had but one heart and one mind. Through him and through her Christ performed many great works.'

The most famous miracle associated with Brigid tells of her confrontation with an Irish Chieftain. She asked him for a quantity of land so that she could build a monastic community. The Chieftain replied that she could have whatever amount of land her cloak could cover. Brigid took the cloak from her shoulders and cast it on the ground where to the amazement of all onlookers it covered over twelve acres of the Chieftains lands! He gave it willingly. 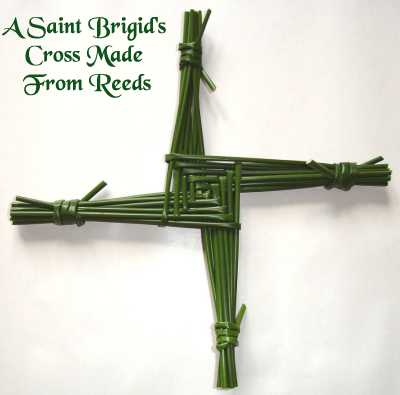 Brigid died in the year 525 with the date of her death becoming that of her feast-day, February 1st. It is on this day that she has since been celebrated, her memory marked with the traditional creation of the Saint Brigid Cross, made from reeds. She is buried next to Saint Patrick in Downpatrick.

Such was her popularity among the Irish that her name and its many variants became incredibly popular over the following centuries. Such was the extent to which every Irish family had a child bearing the name, that when they ventured abroad to England or America that the name Brigid assumed the meaning of 'Irish woman'.

Saint Brigid of Ireland is one of many Irish Saints who have been associated with ancient Celtic Pagan Gods and Goddesses. The Celtic Goddess Brigit (or Brigid, Bríg), whose name means 'exhalted one', was of the Tuatha Dé Danann, the daughter of the Daghda and wife to Eochu Bres. She is associated with the Spring season, with fertility, healing, poetry and smithcraft. She is credited with creating the ancient tradition of 'Keening', which is a form of wailing, weeping and singing, and is caried on to this day in rural Ireland, especially at wakes and funerals.

The Goddess Brigid was 'syncretized' with Saint Brigid during the middle ages. This was a process whereby the practices, beliefs and traditions of a Christian Saint were merged, blended and assimilated with an earlier often mythological character. It is no coincidence that both Brigid the actual Saint who lived in Kildare and Brigit the mythological Goddess of old Ireland are both associated with the coming of Spring.

Saint Brigid is celebrated on February 1st each year, the day and month of her death. It is this day that also happens to be the date of an annual Gaelic Pagan festival called 'Imbolc', marking the beginning of Spring!